I just finished another psychological thriller! It is a follow up to The Brotherhood which I reviewed a few weeks back. I’m planning on doing a giveaway on both books so if they seem like something you would enjoy, then please keep your eyes peeled! The synopsis is borrowed from Goodreads:

After mange events leading to the resolution of The Brotherhood Melissa and her husband Mark resolve to turn the Abbey into a refuge for victims of domestic abuse. But when Melissa’s long-lost sister, Jess, turns up at the Abbey, new complications arise.

As Jess struggles to come to terms with what she’s been through, her sudden freedom brings unforeseen difficulties. The appearance of a stalker – who bears a striking resemblance to the man who kept her prisoner for nine years – leads to serious problems for Jess. Can Jess overcome the traumas of her past to rescue her sister?

The Refuge is a good follow up to The Brotherhood. I had some hopes when I started reading it, and among them were that I would learn more about The Brotherhood and the abbey, and I wasn’t disappointed. Another thing with this book that it is much more gripping right from the start. You automatically feel pulled into the story and I think that has to do with the fact that we are presented with a very familiar name (at least if you’ve read The Brotherhood). The Brotherhood also started out with a bang, but I feel like The Refuge had a gripping start in a different kind of way than The Brotherhood. It is hard to explain without spoiling anything (and you know that I prefer not to do that) so I suppose you have to read to book for yourself in order to understand what I’m talking about!

Storyline-wise The Refuge is not as stuttering as The Brotherhood was. It feels much more connected right from the start, and it flows a lot better both language-wise and story-wise. I particularly enjoyed that the story isn’t straight forward, but rather twisty which makes it hard for the reader to predict the ending, but at the same time keeps the reader engaged while reading. There is a lot of stuff going on between the lines in this book, and when you finish it you will realize that there have been things going on in the shadows all along, but due to other points in the story, the reader may not have picked up on the hints. I know I didn’t, but who do we kid? Maybe we should all realize soon, including me, that I’m no detective, haha.

I love the fact that my favourite character from the last book, Tina, is more involved in this story. I really enjoyed getting to know her more and I also enjoyed the role she played in this book. This turn of Tina’s story really made me happy, because I really think she deserves a good ending to everything. I was also happy to learn more about Jimmy in this book. He was a more resolved character in the previous book, but in The Refuge, he has a more prominent role. I was very very happy about his ending in this story, I truly believe that it is so deserved! I found Jess to be an interesting character as well. She was definitely the character who brought out my emotions in this book. I could be angry with her, happy, sad, annoyed, and curious to mention a few. She was definitely an important factor in making this story what it is, and I think Fenton has weaved her in quite nicely to fit alongside the story. She definitely creates a lot of action, both good and bad, within this story, and you never know quite what she is going to do. I like that!

The Refuge is a good psychological thriller in my opinion, and it will pull you in from the very start. There is several twists and turns within the story which makes it hard for the reader to predict the outcome, and to me, that is very important! I hope to read more from Jo Fenton in the future! 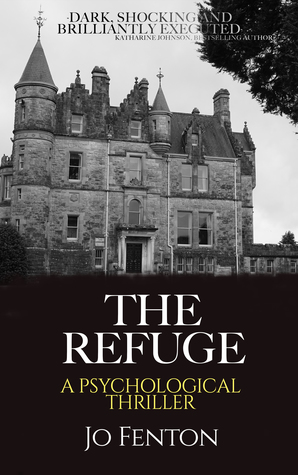