Life…again this life is in the way but this time it’s moving and not work that has disrupted my reading. I also had to wait for the second and third book of this series, I know right? Imagine that pain….Well, not really, but you know when you are so eager to get your hands on a book and the postal system just doesn’t deliver things quickly enough?! The books got here in the end though haha. The synopsis is borrowed from Goodreads:

“We are the children of the Dark Prophets.”

Filled with monsters, magic and mystery, Ruins is the thrilling second instalment of the critically-acclaimed Sentinel Trilogy.

In his desperate search for answers about the Sentinels, an ancient society of demon hunters that his parents belonged to, fifteen-year-old Nicholas Hallow is tipped into a fresh nightmare of terrifying monsters – and even more sinister humans – which threaten to send the world spiralling into chaos. Can Nicholas track down the mysterious girl who holds the key to their fate?

First of all, I did not get my wish fulfilled that I uttered in my post about the last book (link here). Poor Sam just gets hurtled about everywhere! Mr. Winning you have to be nice to the chap if we are going to keep him until the last book! With all the monsters he’s chasing I’m surprised that there is anyone still left in the Sentinel Universe, haha. This book brought more of the good characters from the last book. I’m currently very worried about my favorite one, Isabel, but I won’t say any more about that. I’ll have to continue reading the third book and you have to start reading this trilogy. I’m also becoming very fond of Aileen which is a new character of the very lovable kind. I have some secrets hopes for her, but we’ll see if I’m right. Another character who enters the scene is a girl named Rae. She is very peculiar and I’m curious to see how she fits into this whole system with Nicholas (the main character). I have some ideas, but for now, Winning haven’t spoiled too much about her so I hope it will become clear in the third book.

Writing wise it is as splendid as the last book. What I was a little surprised by was that when the second book started we were almost right where the first book ended. This was new to me, and I haven’t encountered that in other books before. It was very nice in a way because that meant I didn’t have to wonder about what had happened in the meantime. I felt that it was a little bit less action in book two, but it was made up for since we become more informed about the secrets in the Sentinel Universe and some things are cleared up. Don’t get me wrong, the book is still full of action and you’ll probably die of excitement at the end. I know that I almost did.

This series is still full of secrets and there is a lot of hints laying about, but since Nicholas doesn’t know them, we don’t either. There were a few secrets revealed in this book, but I felt more were lurking just under the surface, like a never-ending set of lies. I still can’t piece together how everything will work out by the end of the third book, but that’s what’s especially entertaining with this trilogy. It is so hard to know what’s waiting around the next corner and Winning doesn’t give anything away too easily!

I can’t say it enough – read this trilogy! You’ll not regret it and both Amazon and Book Depository sell the books so get buying! I’ve been fond of fantasy for a while, but this trilogy has just made this fondness skyrocketing! 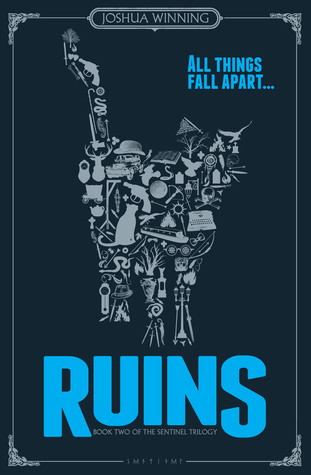